Create an Account - Increase your productivity, customize your experience, and engage in information you care about.

Known to the Mohawks as Kanaiatarowenenneh, or “the big waterway,” the mighty St. Lawrence River etches our border to the north, with the Grasse and Racquette Rivers winding their paths within our village and town. Long before Massena had its name or settlers to farm its land, our region had a rich and marvelous history of aboriginal use and heritage dating back over 9,000 years. Archeological studies of the waterway around what is now known as Massena and Akwesasne (which means "place of partridges") show evidence of extensive aboriginal use for hunting, fishing, gathering berries and plants, as well as sophisticated trading networks that likely included jasper, flint, quartzite, furs and copper. Click here for more information on the River of the Iroquois.

Our community was established in 1792 when Anable Faucher leased land from Canadian Indians who had received it as part of a treaty. Named for one of Napoleon Bonaparte’s Generals, André Massena, the community’s first settlers came to the area from the neighboring State of Vermont. The Mohawk Indians called the Massena settlement Nikentsiake – which means, “where the fish live.”

Not long after its founding, residents tried to have the name changed from Massena to something more patriotic than a name connected with Napoleon and his demise. Attempts to change the name to Jefferson (after President Thomas Jefferson) were rejected because it would duplicate the name of another town in New York State, and the names “Americus” and “Liberty” eventually lost momentum during a long bureaucratic process. 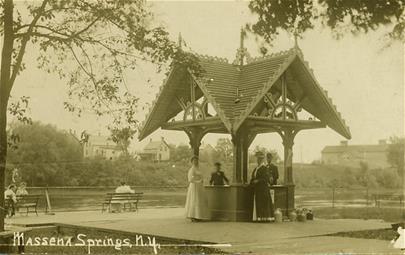 During the 1800’s, Massena grew in prominence as a health retreat as people flocked to the area to enjoy the medicinal benefits of bathing in the sulphur mineral springs found along the Racquette River. Known to the Indians as Kanaswastakeras, meaning "the place where the mud smells bad," the Iroquois had been visiting the springs and using the waters for their "curative" powers for generations before settlers from New England and Europe came to this area. The Indians described the springs as a place where many moose, deer and their sick brothers would come to drink the healing waters.


The sulphur springs provided a booming economy for the place known as Massena Springs, N.Y. Many grand homes and hotels opened and grew to accommodate the many people who would come to "use The Massena Waters." For those who couldn't travel here, the curative waters were locally bottled and shipped far and wide. In celebration of its history, our present-day Springs Park received a major renovation and dedication in 2004.

The Springs continued as the community’s primary industry until the turn of the 20th century when industry found its footing with low cost hydro power. The first hydroelectric facility was built in 1900 when Henry H. Warren organized a company to dig a power canal that connected the Grasse River and the mighty St. Lawrence. In that distance, the depth dropped 45 feet and allowed for the harnessing of 200,000 horsepower.

This source of inexpensive, reliable power enticed the Pittsburgh Reduction Company (later named the Aluminum Company of America, or Alcoa) to establish a facility in the community. With the influx of workers created by the new industrial plant, housing shortages were not uncommon and many workers stayed at the grand hotels formerly filled with those who sought the healing powers of the mineral springs.

This second era of progress for Massena continued to develop in the 1950’s with the development of the Power Project, now administered by the New York Power Authority, and the Saint Lawrence Seaway Project.

Serving as a model for the utility industry well beyond our State’s borders, the New York Power Authority has a magnificent history of overcoming obstacles, realizing visions and enjoying the involvement of such great individuals as Theodore and Franklin D. Roosevelt, Robert Moses and Thomas Dewey.

Because of their tenacity, Massena became the home of the first New York Power Authority hydropower plant – the St. Lawrence-Franklin D. Roosevelt Power Project. It stretches the length of 10 football fields across the St. Lawrence, connecting the U.S. and Canada. The Power Project produces some of the cheapest power in North America with 16 turbines generating more than 900,000 kilowatts of electricity – plenty of power to light a city the size of Washington, D.C. 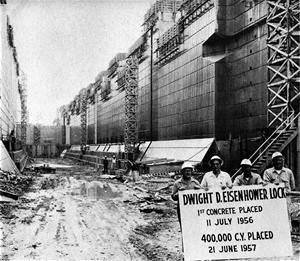 The 1950’s also saw the development of the Saint Lawrence Seaway – a system of locks and gates that raise or lower the water levels to allow boats to traverse the river from its opening at the Atlantic Ocean into the Great Lakes.

The St. Lawrence River drops 226 feet between Lake Ontario and Montreal, Canada. To allow vessels to pass through the 800-mile long river and in and out of the Great Lakes, the St. Lawrence Seaway (a massive American-Canadian navigational project) was begun in 1954 and completed in 1959. The Seaway created the final link in the Great Lakes-St. Lawrence River system, connecting Duluth, Minnesota, some 2,340 miles (3,766 km) away, with the head of the Gulf of St. Lawrence, through a complex system of lakes, rivers, deepened channels, locks, and canals.

With the completion of the Seaway and the Power Project, Massena realized a major expansion at the Alcoa plant – now recognized as the oldest continuously operating aluminum production and fabricating facility in the western hemisphere. It also became home to a Reynolds Metals (now part of Alcoa) -- providing employment to more than 2200 people and over $200-million to the North Country economy in payroll, taxes and local purchases.

Massena has not been immune to the affects of recession and economic downturns. At times over the past three decades, we’ve faced the challenges of line closings at the industrial plants, resulting job losses and rises in unemployment. But, as a community, we’ve risen to every challenge and continue to work toward a diverse and stronger economy with planning and perseverance.

In the 1980s, as the Canadian dollar’s value increased, the influx of shoppers into Massena from our northern neighbors was met with the establishment of a regional retail mall. The St. Lawrence Centre Mall, St. Lawrence Centre Ice Arena and St. Lawrence strip mall complex was built along State Route 37, along with the neighboring BJ’s Wholesale Club and Aldi’s stores. They joined retail districts located in downtown Massena, along the corridors of East Orvis and Main Streets, the Willow Grove area and the Harte Haven Shopping Center. In 2007 / 2008, the community saw more development along this commercial corridor with the completion of Walgreens, Pizza Hut Wing Street, Tractor Supply, Super Wal*Mart and Home Depot.